As the 65th annual Engineers Week closes, Aerotek explains why it's a great time to be an engineer. 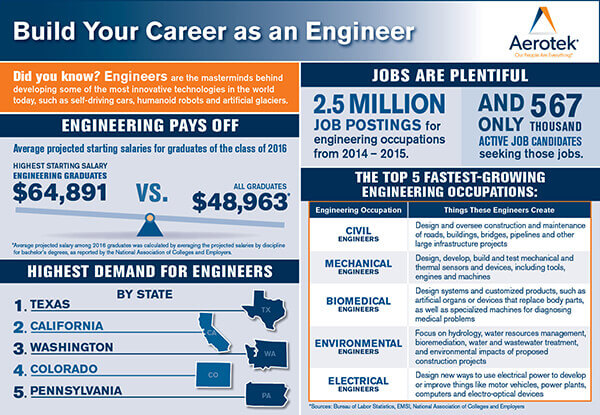 Engineering continues to be a promising career to choose, according to Aerotek, a leading provider of engineering staffing and recruiting services. With the 65th National Engineers Week coming to a close on February 27, Aerotek reports that today’s engineers enjoy the benefit of higher pay and low unemployment rates as well as the opportunity to drive innovation in an evolving world.

A low unemployment rate of 3.6 percent among engineers is helping to drive the demand, as employers face a relative shortage of talent needed to fill new positions as well as positions vacated by retiring workers. From January 2014 to December 2015, there were 2.5 million engineering jobs posted but only 567,000 active job candidates, according to CareerBuilder.

Also fueling high demand for engineers is their essential role in many of the country’s most vital priorities and advances, such as constructing and repairing large infrastructure projects like roads and bridges; designing and building tools, engines and machines; developing systems and tech advances in medical equipment; analyzing the environmental impact of construction projects; and developing sophisticated consumer electronics. These and many other needs are why, according to the Bureau of Labor Statistics, the following occupations are experiencing the fastest growth:

Aerotek, the No. 1 U.S. engineering staffing firm according to Staffing Industry Analysts, was recently among the 1 percent of staffing firms recognized in Inavero’s Best of Staffing® Client and Talent Awards. For more information on Aerotek or to apply for jobs, please visit Aerotek.com.