The U.S. economy added 263,000 jobs in September while the unemployment rate stabilized at 3.5 percent, according to the U.S. Bureau of Labor Statistics (BLS) Employment Situation Summary. Among industrial sectors that continued to see gains in terms of employees on payrolls were manufacturing and construction, while some sectors such as transportation and warehousing saw slight decreases.

The latest Job Opportunities and Labor Turnover Survey (JOLTS) report, which runs a month behind the BLS Employment Situation Summary, showed there were 10.1 million job openings on the last business day of August.

Job openings spiked in construction (+54,000) while falling in some industrial sectors including in manufacturing (-115,000) and transportation, warehousing, and utilities (-44,000).

While openings fell in manufacturing, where there were 115,000 less openings in August than there were in July, openings remain high for the sector. The manufacturing sector spent a decade never recording more than 530 job openings until February 2021. Since that time, it hasn’t recorded less than 750 openings in a month.

Workers continue to quit at high rates, according to the BLS. Quits are generally voluntary separations initiated by the employee, and remained above 4 million for the 15th consecutive month. Quit levels saw spikes in transportation, warehousing and utilities (+8,000 over July) and construction (+19,000 over July), while quits in manufacturing were down slightly (-2,000).

Employers everywhere are struggling to find skilled labor and there is palpable worry about the future, with leaders as high up as the U.S. Department of Transportation expressing concern. The DOT’s inspector general Eric Soskin described the government's hiring challenges to Transportation Secretary Pete Buttigieg on Oct. 5 in a report concerning the DOT’s needs as it looks to implement $660 billion in funding for programs authorized under the Infrastructure Investment and Jobs Act.

Sotskin’s report was representative of many discussions happening across boardrooms. The report reads: “the Department faces challenges in recruiting, developing, and retaining the necessary workforce to timely, effectively, and efficiently implement IIJA programs… Competition among employers for skilled workers has intensified across the United States, and recent Governmentwide surveys have indicated that most DOT employees would consider taking different positions if offered more workplace flexibilities or remote options elsewhere.”

The unemployment rate edged down to 3.5%.

Job growth in September included spikes in industrial sectors including manufacturing and construction.

The labor force participation rate remains 1.1 percent below its February 2020 level, prior to the COVID-19 pandemic.

“Businesses large and small are grappling with the question of how they position themselves as attractive employers. While making your business appear attractive to job-seekers is a priority, it shouldn’t be the only one as you want to be sure the people you are recruiting are fit for a long-term future with your business. The labor shortage isn’t going away any time soon, and a partner like Aerotek can help you deliberate these important questions and develop an action plan to move forward.”

According to a recent story in The New York Times, U.S. factory jobs are booming again at a rate not seen since the 1970s. American manufacturers cut roughly 1.36 million jobs as Covid-19 shut down much of the economy across three months in 2020. As of August this year, manufacturers had added back about 1.43 million jobs, a net gain of 67,000 workers above prepandemic levels.

Still, the labor shortage is significantly impacting manufacturing, according to the U.S. Chamber of Commerce. The business organization last month said the labor shortage is most pronounced in retail (where roughly 70 percent of job openings remain unfilled) and manufacturing (about 55 percent), and even if every unemployed person with experience in the durable goods manufacturing industry were employed, the industry would only fill 65% of the vacant jobs.

The National Association of Manufacturers released its Manufacturers’ Outlook Survey for the third quarter of 2022 in September, and while supply chain disruptions were the primary business challenge that manufacturers pointed to (78.3%) – attracting and retaining a quality workforce was not far behind (76.1%).

But many employers are realizing that hiking paychecks is only part of a labor solution that will stand the test of time.

John Robertson, Vice President of the Food and Beverage Vertical for Life Cycle Engineering’s Reliability Consulting Group, wrote in Food Industry Executive that employers should focus on  improving the culture and experience for employees at their businesses.

“Engaging, connecting, and coordinating your workforce with the right training, processes, tools, and technology is the foundation of a smart culture that paves the way for a smart operation – one that can outperform the competition in plant performance, regulatory compliance, innovation and retention,” Robertson wrote.

By the Numbers: Manufacturing 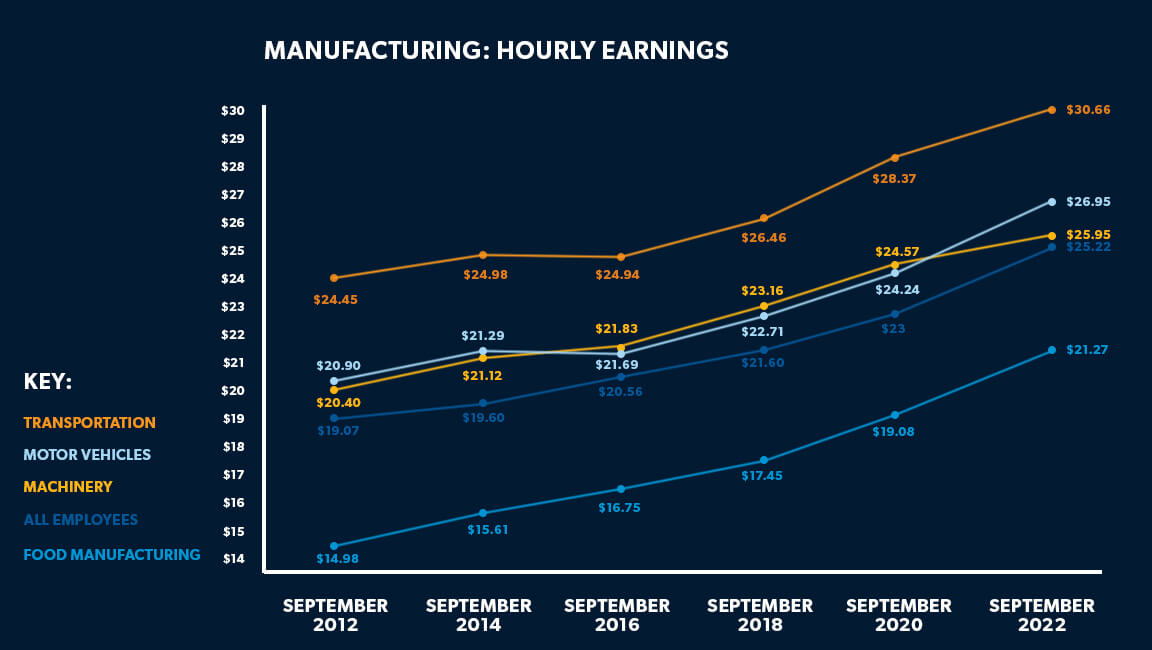 “It’s not just pay that’s going to stabilize your workforce and set you up for the long-term. Employers need to start considering a multifaceted approach that includes speeding up onboarding, updating onboarding compliance policies for Dug Testing and Background checks to start driving a more diverse workforce, and reconsidering dated attendance policies. Complex problems demand complex solutions, but we can help simplify how you get from where you are now to where you need to be to set your business up for success.”