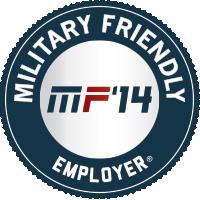 Aerotek® Inc., a leading provider of recruiting and staffing services, today announced that it was named a 2014 Military Friendly Employer® by Victory Media, publisher of G.I. Jobs and Military Spouse. Aerotek’s selection marks the third consecutive year it has been included on the list. The award recognizes corporations that have made a significant commitment to hiring former military, and it is determined by assessing each company’s recruiting and hiring efforts, the percentage of new hires with prior military service, retention programs, and policies for National Guard and Reserve members called to active duty.

Aerotek provides veterans and their spouses opportunities for civilian jobs through contract, contract-to-hire and direct placement options. Aerotek also supports military service members by providing guidance on how to best utilize their military training and expertise during the job search and interview process.

“Many organizations seek and value the unique skills that veterans bring to the civilian workforce. At Aerotek, we partner with veterans to help them leverage their experiences to find the right company in need of their skills,” said Shelton Guinn, executive director of human resources. “We greatly value the contributions of the men and women who have served our country, and we are proud to once again be recognized as one of the top Military Friendly Employers.”

Based on a survey sample of 5,000 companies, the Military Friendly Employers® list is developed with the assistance of an Advisory Board made up of leaders in the military recruitment community and independently tested by an external organization.

For more information about Aerotek’s staffing services for transitioning military, visit AerotekCivilianJobs.com or call 1-888-Aerotek to be routed to the closest Aerotek office.

About Victory Media
Victory Media, Publisher of G.I. Jobs, is a service-disabled, veteran-owned small business, serving the military community since 2001. Our Military Friendly® lists and methodology can be found at MilitaryFriendly.com. Our data-driven lists are published in G.I. Jobs, Military Spouse, Vetrepreneur magazines, republished in periodicals like USA Today, Wall Street Journal, Fortune, Forbes and Bloomberg Business Week, and are frequently cited on national TV programs such as CNN, CNBC, NBC, Fox News and others.

About Aerotek
Aerotek, headquartered in Hanover, Md., is a leading provider of technical, professional and industrial staffing services. Established in 1983, Aerotek is an operating company of Allegis Group, the largest provider of staffing services in the U.S. Aerotek operates a network of more than 200 non-franchised offices throughout the U.S., Canada and Europe. For more information, visit Aerotek.com.