As America’s labor shortage rages on, employers are finding themselves in a pickle.

According to a survey of National Association for Business Economics members in mid-July, respondents reporting shortages of skilled labor increased to 32%, up from 29% in April. A majority of the group's members expect the current labor shortage to last until at least next year, with 18% of respondents predicting it will last until at least 2022 and 10% projecting it may not abate until 2023. Just 6% of respondents said they expect the shortage to stop in 2021.

The response to the shortage has been layered.

Wages are rising everywhere, and that includes the wages of light industrial and skilled trades workers. Wages are projected to rise over the next 12 months at the fastest pace in two decades, according to a survey by the National Association of Manufacturers.

However, higher commodity prices are hurting companies in industries such as construction and manufacturing, making it tougher to keep pace in the broader labor market. The Wall Street Journal reported in June that pay for factory jobs has grown so slowly in the U.S. that manufacturers are having trouble competing with fast-food restaurants. Aided by the rise of minimum wages across the country, hourly restaurant workers are making 28.5% more in 2021 than they were in 2017, compared to hourly manufacturing workers who are making just 13.4% more in 2021 than they were in 2017. 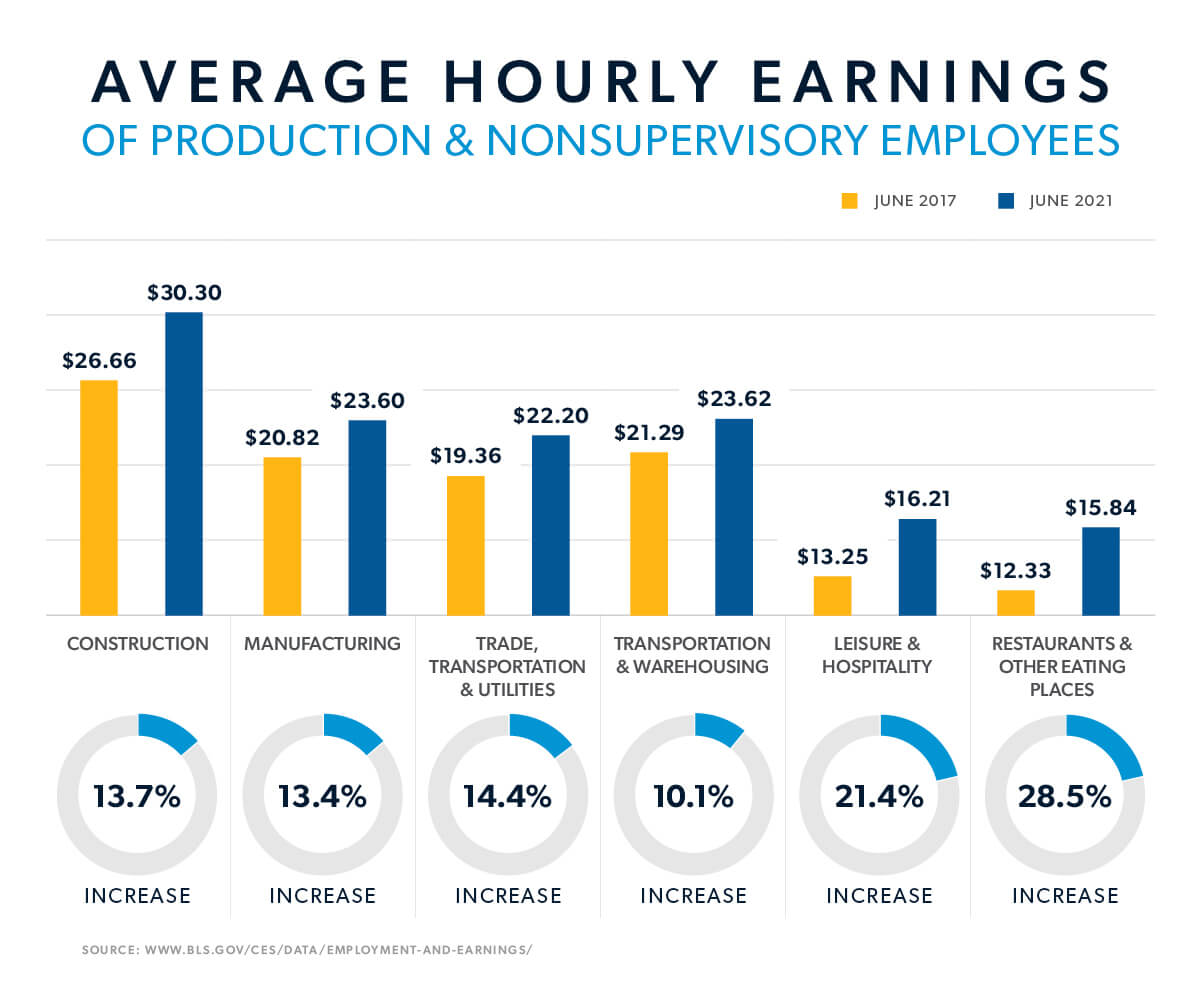 In lieu of or in addition to hiked wages, employers across the country are beginning to offer new incentives to lure talent to their companies. Indeed reported on the emerging trend, noting that the share of job postings that mention hiring incentives has more than doubled, to 4.3% on July 16 from 1.8% one year earlier. Much of the increase in incentives, Indeed noted, has come just in the last several months.

“If you’re not going to make the changes you need to make now to get the talent, you’re either betting on the labor shortage to end when unemployment benefits expire, planning on your business contracts to accommodate your lack of ability to fulfill – or you’re looking to automate and not hire workers at all. But all of those options will cost you money, too,” explains Dan Stiles, director of strategic sales for Aerotek.

Here’s an example: Two logistics companies are hiring workers with the same skillsets in the same city, and each company is looking to hire several hundred workers. One company has a bigger brand name and pays its workers higher wages.

In the past, the lesser-known company with lower wages may have been able to settle for less-skilled talent. But what happens when there isn’t enough talent available to fill all the jobs? This situation and similar questions are being asked more now than they ever have before, explains Anthony Sanzone, director of strategic sales for Aerotek.

“Candidates aren’t just seeing a job, applying for it and starting. Every candidate is pursuing multiple opportunities and it’s pitting employers against each other,” Sanzone said. “So what are you doing as a company to not only have an attractive job and attractive workplace, but to compete against all these other companies?”

A quick scan of any job board will show you that hiring incentives like sign-on and attendance bonuses are becoming more prevalent. At Aerotek in late July, a range of bonuses were offered – from a maintenance technician opportunity in Pennsylvania offering a $5,000 sign-on bonus, to a warehouse production associate position in Maryland offering a $300 attendance bonus every other week.

A poll conducted by the U.S. Chamber of Commerce in June surveying Americans who lost their jobs and are not actively looking for work. Of those surveyed, 39% of respondents said a $1,000 hiring bonus would increase their urgency to return to full-time employment. Of the same group, 24% said a five percent increase in compensation for a position similar to their previous job would increase their urgency.

In the world of hiring, it’s often the biggest companies that have a leg up.

Amazon is offering $1,000 sign-on bonuses, and the benefits don’t end there. The e-commerce giant offers opportunity with programs such as its Career Choice Program, which will pay employees up to 95% of tuition and fees (up to a yearly maximum) towards a certificate or diploma in qualified fields of study, leading to in-demand jobs.

On July 27, Walmart announced it will pay 100% of college tuition and books for its roughly 1.5 million full- and part-time employees, effective Aug. 16. The largest private U.S. employer said it would be investing $1 billion over the next five years into career development for its employees.

Where a material incentive isn’t the only answer, employers are also looking at ways they can cut the time it takes between receiving an application and getting a worker on payroll, said Pat Lamon, director of vertical sales for Aerotek.

“Our clients have been very agile, looking at market rates and waivers, reducing the need for employment and education backgrounds,” Lamon said. “All of those processes that are delaying the hiring process — We can continue to forge forward and get that information for you, but you may risk losing that potential hire if you are requiring it as a condition of hiring.”

When all else is even, and even in cases where employers are offering slightly less than a competitor, it can pay to offer candidates the straightest line to employment.

At some airports in the country, a set wage means workers earn the same whether they work at Starbucks or you spend their days on the ramp pulling bags out of planes.

"It’s all the other stuff,” concludes Sanzone. “Re-doing onboarding, offering retention and sign-on bonuses, throwing bean bag chairs in the breakroom — you have to do whatever it takes to make your job more attractive.”

Stay tuned for the next article in this series that will explore the long-term solutions employers are examining to address the reality that the worker shortage may not ever end.