“There’s something called the Rock River Anything That Floats Race, here in Rockford, Illinois,” Jordan explained at the beginning of our conversation. “This summer I decided to enter it, and designed and built my first boat. It was a dual-canoe design with a center paddle wheel powered by bike pedals.”

Jordan and his team went by the “The Bike Elves” because his vessel was powered by a repurposed bicycle.

If you needed to know just one thing about aerospace engineer Jordan Towne – it’s his keen attention to the details around us and his knack for improving the world and products that surround him.

“We came in fourth, which is fine, but — well, we definitely should’ve taken at least third. We were swamped at the start and ended up carrying twice the human load that I designed for. Next time, if there is one, I’ll do it right — I know just what changes I need to make to place.”

Growing up with a plan

In recounting that story, Jordan revealed much about what makes him tick as an engineer’s engineer. His adventurous nature. His affection for simplicity in design. His dedication to the importance of the team. His obsession with improvement.

“Ever since I was a little boy I wanted to be an aerospace engineer. My plan was set early —– go to Cal Poly for my BS, graduate, get my master’s and then work on complex aerospace systems. That was the plan, and I guess you could say it worked out well.”

The journey’s the thing

As Jordan recapped the story of an already impressive career, we had a hard time keeping track of the incredible mix of aircraft and systems he’s worked on as it’s no short list.

“I’ve really enjoyed a pretty rich career, mostly as a contractor. One of my first contracts was with one of the largest aerospace companies. They were looking for a cost engineer to work on one of their medium-range bombers. That was pretty cool, and following that I worked on everything from guided missile systems to workhorse transport planes.”

But in the long list of aircraft and systems that Jordan has become a specialist in, it was a particular system, the toilet system, that ended up becoming an unlikely spark for his career acceleration.

“It may sound weird, but I happen to include on my resume my experience working with toilet systems on a specific plane. Believe it or not, that’s what got me to Rockford and, if I trace it all back, to where I am today.”

“I was in the third year of a long-term contract, working on environmental control systems. When my contract ended I was looking for my next job when I got a call from a company recruiter who had seen my resume, and he said, ‘You know toilets?!’”

“I told him how I’d became a specialist by solving an expensive problem one manufacturer had with cleaning fluid overflow, causing millions of dollars of damage to their aircraft. Like most of the problems engineers face, the solution was inevitably extremely simple. In this case, I designed a sort of seal that was slipped between the cowl and the bowl.”

He was practically hired over the phone and, although the contract he was offered was short-lived, it put him in the perfect position for his next gig.

We to asked Jordan about a word he uses a lot. Simple. We said it was something we’ve heard from many of the other leading engineers we work with — that simplicity is almost always the answer. 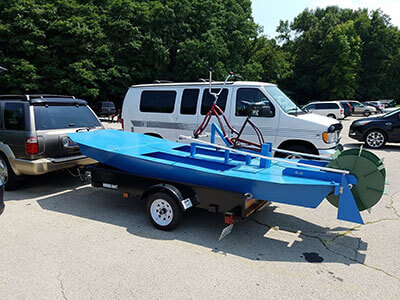 “It’s funny; when I was a kid, I wasn’t particularly inclined towards mechanics, working on cars or machines. But I was obsessive about how things worked — more importantly, how I could improve them. Since then and to this day, I spend much of my time analyzing things and working out how I could design them to make them work even more efficient.

“It sounds cliché, but it’s actually really hard to achieve. And it turns out there’s a very strong business incentive behind simplicity.”

Jordan told us something else we’ve also heard from other engineers. Actually, it was a “someone” — Zac Paeth, senior professional account recruiting manager at Aerotek.

“Zac rocks, absolutely, and he’s played an important role in my career. I was coming off a surprise layoff when out of nowhere I was introduced to Zac from Aerotek. I had worked with other contract agencies before but never Aerotek. Zac took a look at my resume, we spoke on the phone and he said, ‘I have positions for you. Now.’”

“The contract position he offered was a great fit for me and, after just three months, they offered me a direct position. I was pretty surprised to find out the biggest champion and supporter of the idea was Zac himself. That’s the kind of guy he is.”

We asked Jordan about the broader discipline of engineering, and whether he’d seen any major changes since he started out.

“It’s a changing world. A world that was once 2D fast becoming a world of 3D. What I mean by that is, when I started out, we almost always started with drawings, a two-dimensional design tool, and moved eventually to models. Now it’s the other way around. We start with the 3D computer models and, once they’re sound, these generate the paper drawings.”

We’re always interested in what veteran engineers like Jordan would recommend to the next generation of engineers.

“Well, it’s funny; I have no regrets. I’m having a great career. I’ve worked on some amazing systems and machines in the aerospace industry. But if I had to offer advice to someone considering a career in engineering, I might suggest a focus on electrical engineering. The advantage is this — with deep skills in electrical engineering your job opportunities expand into a lot of other industries, like automotive, appliance and tool manufacturers.”

“That said, I love what I do for a reason that I think is shared by engineers of every kind — every day is different. You’re always working on something new, it’s always changing and so you’re always learning.”

We learned a lot from our conversation with Jordan and we know that if he does decide to re-enter the Rock River Anything That Floats Race — he’s going to own it.

If you see a little bit of Jordan in yourself, we’d love to hear from you. Visit our job board to search job postings. Create a free career account today to customize your search based on your skills and interests. Upload your resume and consider contacting an expert career advisor. Our recruiters are available to provide advice you can use and direct you to the right opportunity, including those not posted publicly.