Aerotek Leaders Share the Best Career Advice from Their Dads

We celebrate Father’s Day once a year, but many of us rely on the wisdom our fathers passed down to us every single day of our lives. When it comes to our careers, fatherly advice, support and encouragement can be indispensable. Here at Aerotek we asked members of our leadership team to consider the impact their fathers have had on their careers and to share some of the advice they received. Here are some of their most inspiring recollections.

“In 1998, I started working at Aerotek. It was my first job, and about 4-6 months into it, I got called out for goofing off. My boss said that unless I could grow up, no matter how good my work was, I would be a distraction to others and he would have to let me go. He sent me home to think things over. I was really angry and I called my dad to tell him about it. After I finished telling my dad the story he said, ‘Yeah, so what’s the problem? He’s right, Chris. You do need to grow up.’ I was so mad, that I think I hung up on him. Then I went home and thought about it. It turns out he was right. That was the best advice I ever got.”

“My dad told me to be comfortable with being uncomfortable, strong and courageous at all times and not to be afraid to take risks. In fact, it was my father’s advice that convinced me to take the leap of faith I needed to become an account manager.

As a kid, I didn’t understand the importance of my father being a recipient of the BEYA (Black Engineer of the Year Award – President’s Award), but as I matured I realized what a huge accomplishment this was. He set a great example for both me and my brother.”

Being a Strong Woman

“My dad has had a huge impact on my life. As girls growing up, it was always important to him that my sister and I knew we were capable of doing anything that boys could do. To this day, he jokes that he married my feminist (and wonderful) step-mom partly because he knew she would help him raise strong women!

My father taught us to be true to ourselves and to live the lives we wanted to live. Whenever I’ve taken a risk and failed, he has always cheered me on and praised me for having the courage to try and to learn from my mistakes.”
― Meghan Kahn, Manager of Diversity & Inclusion 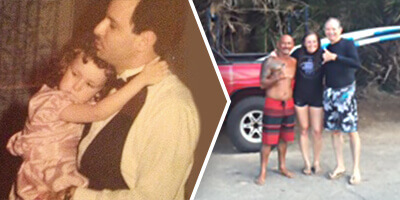 Aim High and Go For It!

“My dad is a mechanical engineer who runs his own engineering consulting company. He always wanted me to follow in his footsteps. Although I didn’t become an engineer, when I started at Aerotek, I chose to work in the aerospace and defense division, finding jobs for engineers. That has been a great way for me to connect with my father.

My father-in-law also had a strong impact on me. He had a career in sales, and told me that in order to be successful, it was important to take a sincere interest in other people. My father-in-law passed away from brain cancer in 2014. Throughout the seven months when he was battling the disease, he always told us to make every day count. That has become the mantra for our family and it was a very important message for me. It encouraged me to move closer to my family, and resulted in a major growth opportunity for my career.

When I’m a father, I’ll tell my children to set high goals for themselves and to follow through on accomplishing them. Take some risks! We’re here for a relatively short time, so there is no sense in playing it safe.”
― Denis Ouellet, Director of Business Operations, Toronto, Canada