Skilled trades professions, a critical part of the nation’s workforce, are in high demand as the economy grows and industries like construction and manufacturing gain strength. However, demand is still chasing supply due to large-scale retirements of Baby Boom and Generation X employees.

More than ever before, today’s skilled trades workers can be selective in their choice of employers, particularly machinists and welders. These workers have the leverage to demand top dollar, impacting recruitment strategies across industries.

The need to pay market-rate wages has gained new traction with Amazon’s recent announcement that it would offer $15/hour minimum wage for U.S. workers, potentially increasing wages up the chain in the manufacturing industry. For any employers who compete with Amazon for skilled trades talent, it’s nearly certain they will need to raise wages or appeal to employees in other ways.

A recent article in the Washington Post cited Federal Reserve Bank of New York data in noting that workers were “moving to firms with higher productivity and with better opportunities for themselves.” In the absence of an immediate increase in compensation, it seems, workers appear to be focusing on the long-term, counting on raises or more lucrative offers in the future.

Where are you going to get the workers you need?

In the current hiring landscape, employers are rightfully wondering where new workers are going to come from. At Aerotek, we are reinvesting in our core value of relationship-building across the country:

Despite growth in the past five years, women constitute one of U.S. manufacturing’s largest pools of untapped talent, according to Deloitte. Women totaled about 47 percent of the labor force in 2016, but only 29 percent of the manufacturing workforce.

To attract and retain female workers, Deloitte recommends that manufacturers offer challenging assignments, work life balance and attractive income. The programs that women find most impactful include formal and informal mentorship programs, flexible work practices and ensuring the visibility of programs that have current female leaders. 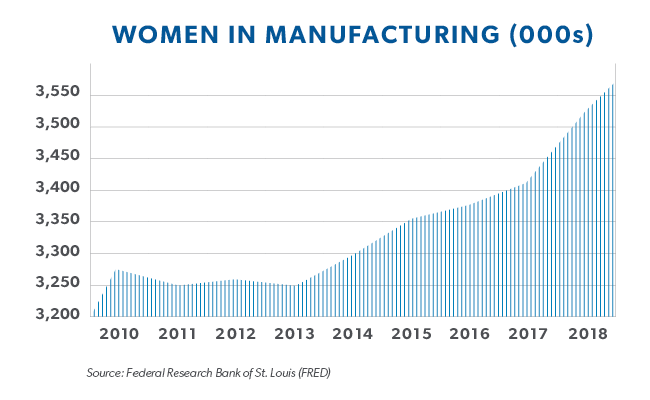 Aerotek Director of Business Development Dave Majerowicz, an Air Force veteran, notes that many veterans embody the characteristics that suit the manufacturing workplace:

Around 200,000 service members transition out of the military each year, making them a large and qualified candidate pool for manufacturing employers.

Although skilled trades employers may be facing the toughest recruitment environment in decades, there are effective strategies that will aid in the acquisition and retention of the workers needed. Working with regional and national groups can help them tap into underrepresented labor pools to fill their needs.